It seems as if everyday Lili is doing something new.
Yesterday she discovered that drawing with an ink pen on the wall is a lot of fun. Boy do I love those Mr. Clean magic erasers.
For her 1st birthday we bought her a Little People’s riding toy. It has colored piano keys on the front and each plays a different song. There is a key that when turned sounds like the car is starting. There is also a shifter that makes a car shifting sound. There are handles on the front for steering while sitting and a taller green handle on the back for pushing while walking. Lili has been content to play with her riding toy, by either pushing the various keys or pushing it around the house. However, she hasn’t been too keen on riding it, that was until today. I had only shown her how to get on it once or maybe twice and that was a few weeks ago, but today she decided to try it on her own. Here are the results. 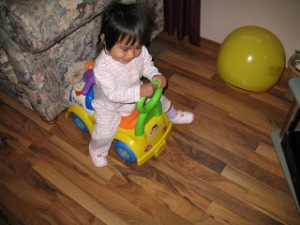 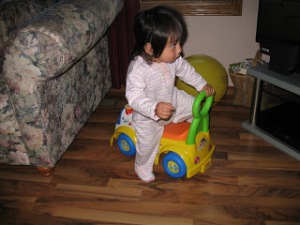 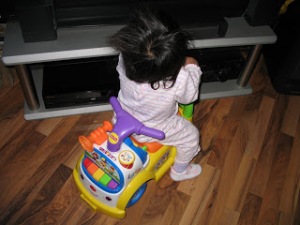 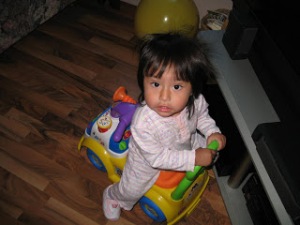 Okay, so she’s directionally challenged, but at least she was able to get on all by herself. She was also successful and getting off without a tumble.

A couple days ago I was in the office trying to get some long overdue filing done. I’m embarrassed to admit that this is the first time I’ve done any filing since Lili came home so you can imagine just how much had piled up. While I was trying to get some things done, Lili was happily playing (or should I say making new messes) when she decided that she needed to try and fit into a basket that was very obviously too small. So I convinced her that playing in a box would be much more fun. Here is Lili in the box she wanted to play in. 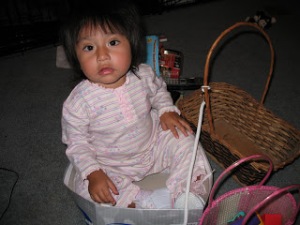 Yes folks, it’s a shoe box and next to the shoe box is the basket that she wanted to play in.

Last, but not least, here is Lili all ready for her last day in the family pool. Fortunately, she’ll have an opportunity to sport her swimsuit again when we head to Myrtle Beach and then Hawaii. 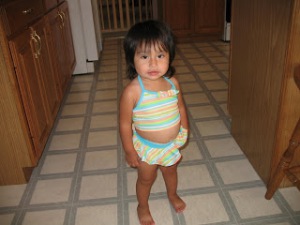