I wrote a blog post every day or at least every couple of days.  Those days seem to be long gone now and I do know that between 5 kids, a husband, a house, homeschooling and just living, the blog has taken a backseat.  Still, I hate that I’m not on top of blogging on a regular basis.  It really is therapeutic and I’m likely going to need some therapy over the next week.

One week from today, there will be a placement hearing about moving Baby Girl from our care to the care of a relative. 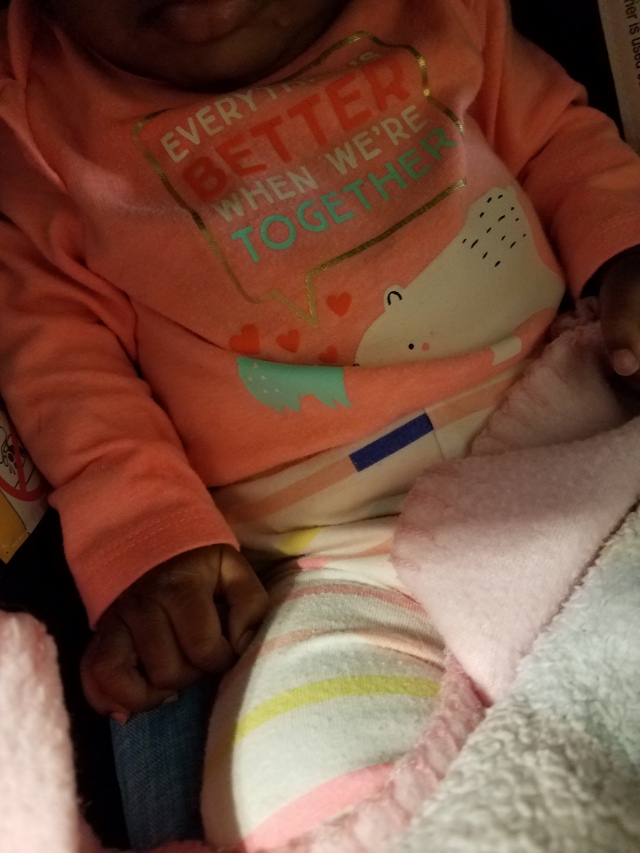 Not that I’m bitter or emotional at all about this (she says sarcastically).  I suppose I shouldn’t be bitter or emotional since I signed up to do foster care and know full well that I will likely say good-bye to each child that walks thru our door.  But at the same time, Baby Girl has been loved, nurtured, and adored for almost 4 months now.  She has become very much part of our family and she is as attached to us as we are to her.  I don’t think this state often does what is truly within the best interest of the child.  I guess that means it’s my job to do what is in their best interest while I have them.

So in one week we will get a call letting us know whether or not she is being removed from our care and into the care of a family member.  Because of the judge overseeing the case, the chances of this happening are very, very high.  As such, we have to do everything we can to prepare ourselves for broken hearts next week.

In the meantime, we did have a good Christmas.  It wasn’t the Christmas we thought we would have though.

On the 21st, we were informed that the little boy we had (the one we told would be with us thru Christmas) would be picked up and taken to a relative.  About 30 minutes after he left, we got a call about two little girls who needed placement and within a few hours they were walking thru our door.  The oldest is 4 and the youngest is 17 months.

They came to us with the clothes on their backs.  Nothing more, nothing less.  We scrambled to get them clothes and gifts for Christmas.

Then, in the wee hours of the morning on Christmas Eve, hubby, Lili and I were all sick.  There is never a good time to be sick, but I’m not sure there could have been a worse time either.  There were gifts to wrap and preparations to complete.  We had family scheduled to come over that afternoon, which we had to postpone.  Of course there was also that little job of elf that needed to happen Christmas night.

Hubby got hit the hardest and I knew he would not have the energy or strength to help.  So I dug deep, did a lot of self-talk and got it done.

Having both parents down for the count meant that there were disappointments as well.

There was no way we could make that happen though.  Not only did either of us have the energy to get to the nearest Cinnabon, but we certainly didn’t want to expose everyone in the store to the flu.  So Cinnabon would have to wait for another day.

Our nephew was visiting from out-of-state and we were not able to see him.  Can’t say I blame him for not wanting to walk into the infirmary.

At least two of us didn’t have the Christmas spirit we usually have and then later that day, Baby Girl threw up.  She was the one I really wanted to try to protect from getting sick.  Somehow, she managed to smiled and coo thru it all!

Now Christmas is over.  The tree has been taken down.  We’re having a major cold snap, so there hasn’t been a lot of time outside the house.

Our two newest are starting to really settle in and we’re preparing for the likely change of Baby Girl moving on.

But that’s our life.  We’re doing what we feel we should be doing.   It’s difficult and it’s  sad, but it’s also rewarding and has left us with happy memories many times overs.   As such, we’ll continue to do this as long as we can.  Maybe one day we’ll accept a placement that will never leave.  Until then, we’ll do all we can to make life as good as we can for these little ones and hope that when they move on, they have a wonderful life.

There are things that happen in life that cause me to be especially thankful for the people in my life.  Over the last couple of days, some very special people in my life shown a great deal of love and compassion.  For that, I’m truly thankful.

We are spending a quiet day at home.  Okay, as quiet a day as you can have with 4 kids in the house 🙂  but are thinking of our loved ones who we can’t be with today.

Have a wonderful day celebrating friends, family, and good food.

As usual, things are busy in the World of Weeks.

The girls both had orthodontist visits. 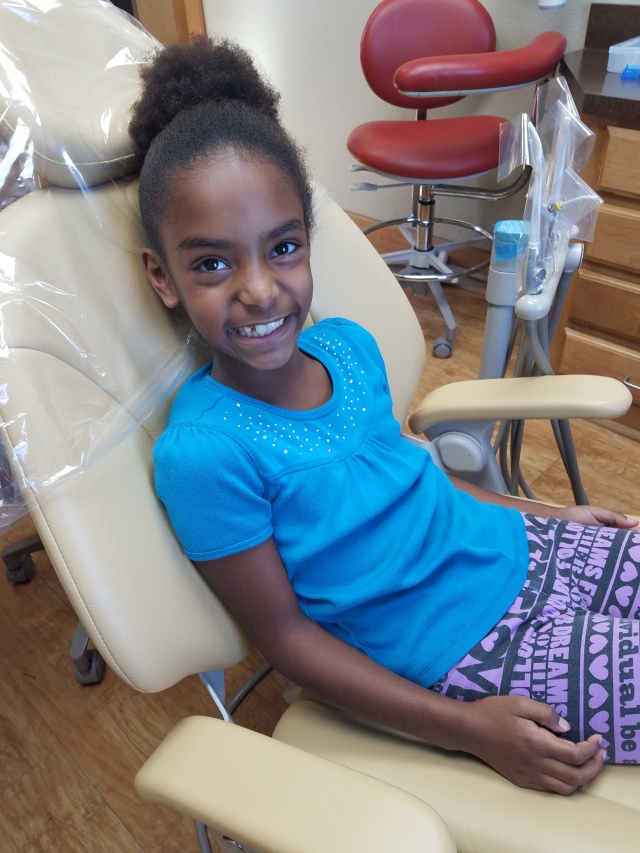 Naomi got a mold taken of her mouth so they can make her an expander.  She just doesn’t have enough room for her teeth to come in.  Hopefully this will prevent the need for braces, although it’s more likely that it will simply reduce the amount of time she’ll need to wear braces, which won’t be needed for a few more years.  She still has several teeth to lose. 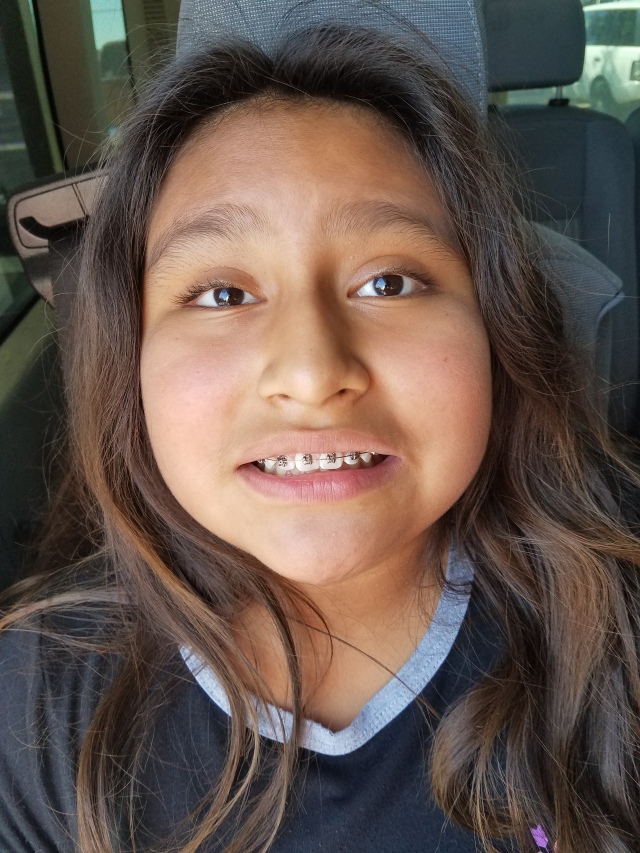 Lili, on the other hand, did get braces on her top teeth.  She’s had minimal problems and is taking very good care of her teeth so far.  She will only need to wear them 12-16 months. 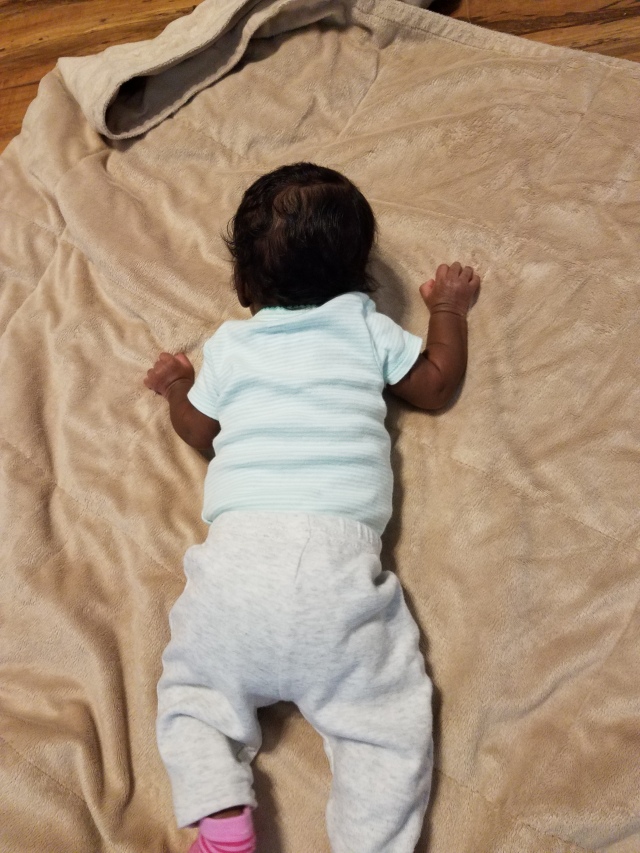 Little Bit is growing and changing daily.  She is really working hard on holding her head up and is beginning to use her legs more.  She is not fond of tummy time, but she needs to work on those core muscles.

She is no long swimming in the newborn outfits.  In fact, she fills them out quite nicely.  It won’t be long until they will be put away and saved for other foster babies we might have in the future.

We took a trip to a local farm with our homeschool co-op.  The girls fed a long-horn bull, cows, calves, llama, goats, rabbits and chicken.  We were entertained by the llama chasing the calves.  We couldn’t have asked for a more beautiful day on the farm. 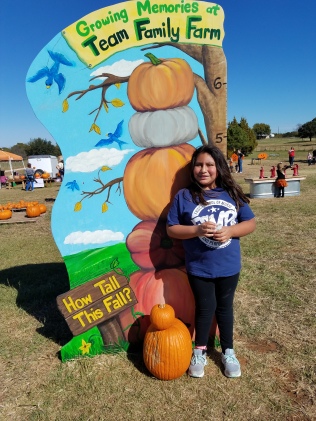 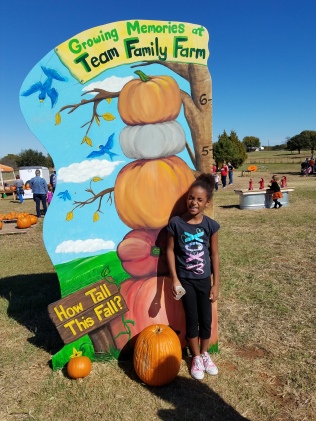 We’re beginning to gear up for the holidays now.  It’s hard to believe that Christmas is only 8 weeks away.  Seems like not so long ago we were opening Christmas presents and now we’re planning again.

Those who are on Facebook are familiar with the little reminders that pop up on an almost daily basis.   This time of the year, many are likely receiving reminders of Mother’s Day posts from years past.

For many, Mother’s Day isn’t all roses and breakfast in bed.  It’s happiness and sadness intertwined.

Here is a memory that recently popped up on my Facebook page.

Wrap a paper towel around the eggs.

Put drops of food coloring on the paper towel and then spray with water.

Gently squeeze to press against the egg and removed any excess water.

Allow them to sit until they dry. 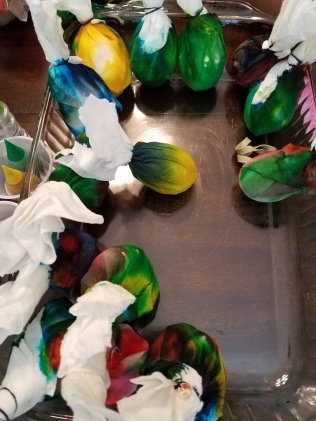 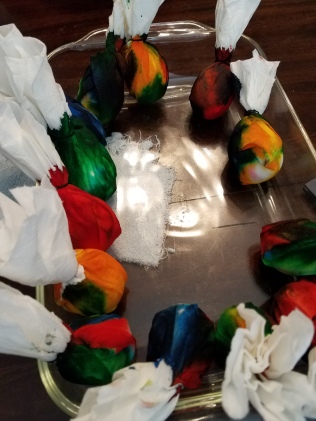 I’m not sure there was enough water sprayed on several of the eggs, but we liked the way they turned out. 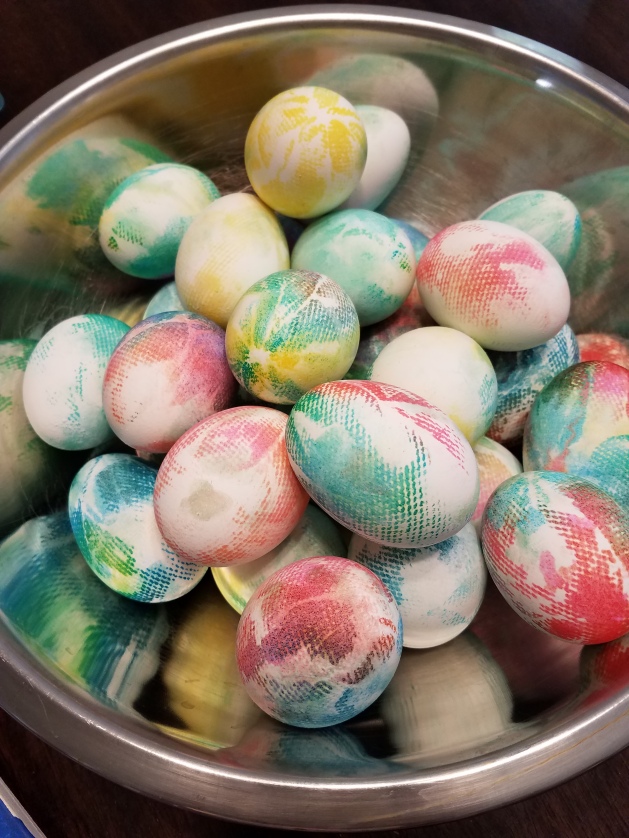 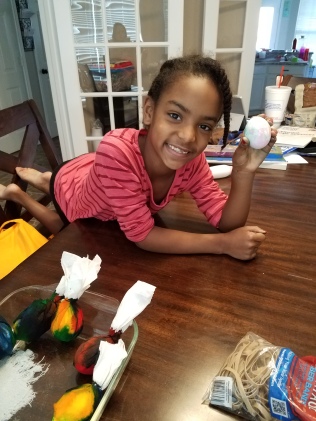 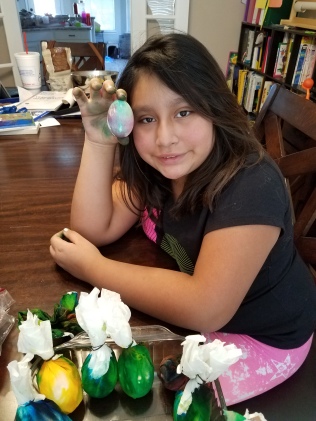 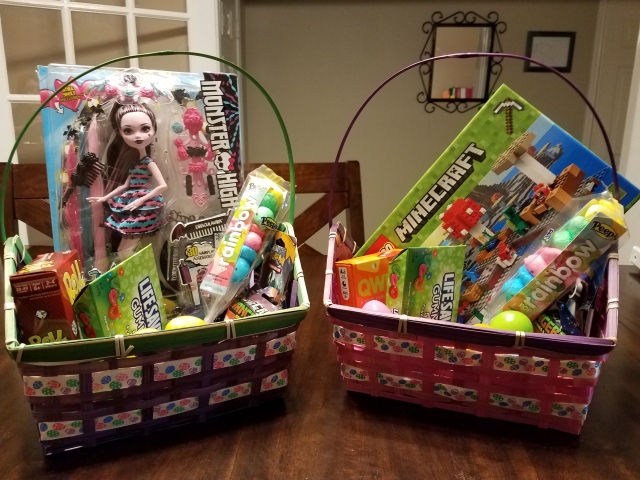 I had quite a few photos on my phone and was running out of room.  So why not share them here. 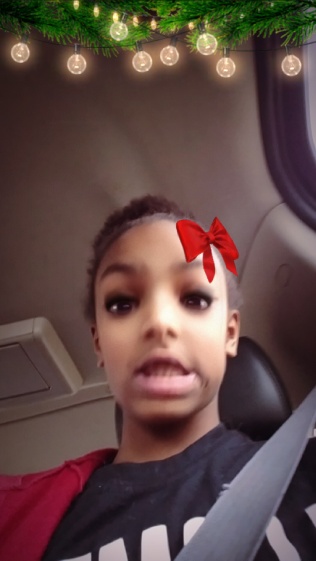 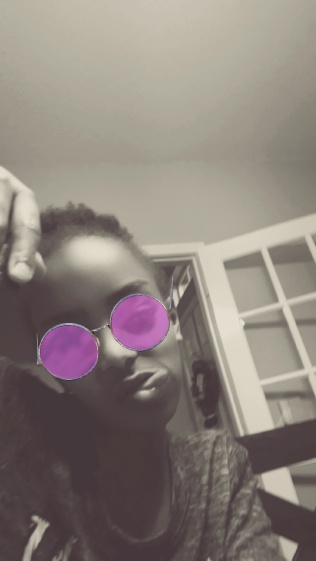 This girl loves Snapchat and I have a lot more pictures to prove it.  Just don’t have the room here to post them all 🙂

In looking at these photos, I think it’s pretty clear to tell which one likes to have her picture taken.

Many years ago, hubby worked for a little company called Boeing :-).  One of his co-workers live on a small yacht on Puget Sound and invited his co-workers to come to his yacht for a Christmas party.

During the party, he took his boat out to parade with all the other boats decked out for Christmas.  It was a memorable time and when I came across this video, it reminded me of that Christmas party so many years ago.  Plus, I really like this song 🙂

Facebook is good about posting reminders for posts past and today I was reminded of a time, four years ago, when I took my girls in to get professional photos taken for Christmas.  It’s a day I will always remember.

Neither of the girls were being very cooperative.  One of them didn’t want her picture taken at all and had to be coaxed to pose for every shot.  The other preferred playing and had to be pulled away from her play to get pictures taken.  The session, took twice as long as it should, causing other appointments behind us to back up.  The photographer worked very hard trying to get good shots on these two uncooperative subjects and it was stressful on all of us.  For a matter-of-fact, I’m quite sure I heard the photographer breath a sign of relief as we walked out of the studio that day 🙂

It was also the last time I took the girls in to get professional photographs.  The one who had to be coaxed to get her picture taken still has to be coaxed and it’s only gotten harder the older she has gotten.  Plus, hubby feels like getting professional photos done is a form of torture and that’s due to both the process and the cost involved.  LOL!!

The stress of that day passed long ago and as I look at these photos now, I smile as I see my girl’s personalities shining through and shed a little tear as I realize how much they have grown and changed in four years. 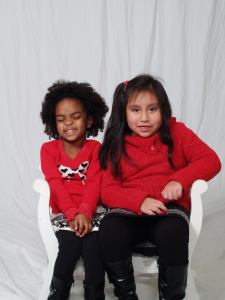 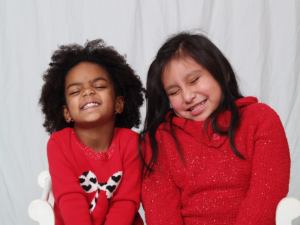 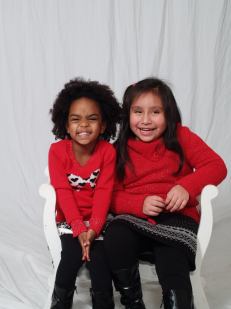 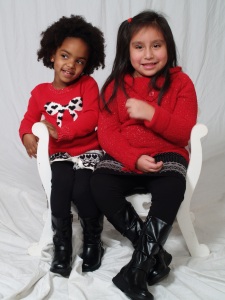 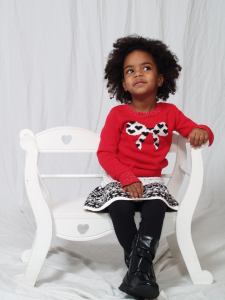 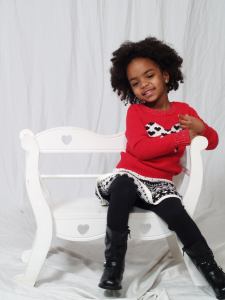 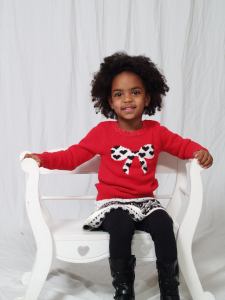 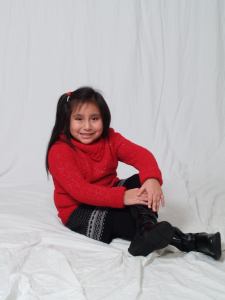 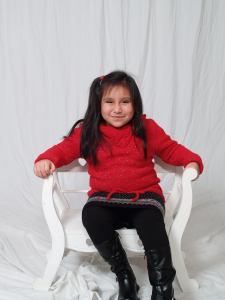 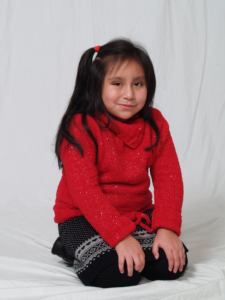 Maybe one day, when the moment is right and cooperation is to be had, I’ll get them to  re-enact these poses and see what I can get.

In the meantime, I’ll continue to enjoy a blast from the past – the Christmas photos of 2012.