Day Three in Hawaii was our day to explore at our leisure. We were provided a Jeep, a car seat for Lili, a picnic lunch and a map of the island. By 8:20 a.m. we were on the road, and after making a couple wrong turns were on our way north along the east side of the island. The scenery was spectacular. 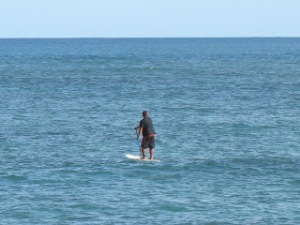 We saw several guys on surf boards with paddles in the water or getting ready to enter the water. I have no idea why they have paddles, but it was fun to watch.

The interesting thing about the island of Kauai is that there is only one main road on the island, but it does not go all the way around the island. We went about as far north as we could and stopped at a beach. There was a man selling fresh coconut from the back of his pick up truck, so Dave bought one for us to try. He cut the top of the coconut exposing a hole in the top and placed a straw in the hole so we could try coconut water. Here is Lili and I with our coconut. I have to admit, neither of us were impressed.

After trying the water, and dumping the rest, the gentleman that sold it to us cut it open and removed the meat of the coconut for us. Again, I wasn’t impressed. It was not at all like the flaked coconut we buy in the store. Dave also found out that the round, brown coconuts we are used to seeing are the same coconut as the one we tried, except as they ripen they become brown. It’s pretty much the same as a banana.

Across the street from the beach was a cave. We didn’t want to go into the cave, but I did get a fairly good picture.

Although this was not quite the end of the road, it was pretty darn close and we decided it was a good place to turn around so we could drive to the other side of the island. We drove south for a little while and stopped at another beach for some lunch.

And we had some guests for lunch.

There are chickens roaming all over the island. We found out that chicken coops were opened during the last hurricane to try and save the chickens. Many were saved and now reproduce and roam free. Lili enjoyed our visitors, but I’m not sure they enjoyed Lili. 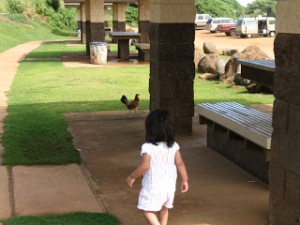 After lunch we headed around to the other side of the island. The west side was more industrial and not quite a pretty, however, we decided to take another road that headed up Wiamea Canyon. Mark Twain calls Wiamea Canyon the Grand Canyon of the Islands. The road winds up about 4000 feet with several lookouts along the way. 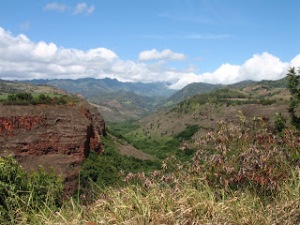 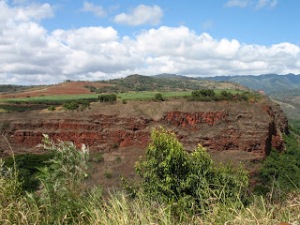 As we made our way further and further up the road, we became more and more nervous. There are virtually no guardrails along the road, just plants, trees or nothing between you and the drop over the edge. We went about 1/2 way up and decided to head back down. Later that day we found out that because of the clouds you couldn’t see anything at the top, but what we saw on the way up was well worth the drive.

We decided to head back to the hotel and get some rest. After leaving at 8:20 a.m. we were back to the hotel by 2:30 and had seen the majority of both sides of the island. Considering the top speed limit is 50 mph and we had to go through many small towns along the way, it gives you an idea of how small the island actually is. There are some other sights that we could have stopped to see along the way, but Lili had been such a trooper and we didn’t want to push her over her limit.

When we got back to our room Dave sat down in the chair and glanced over at the bed and found that we had a friend on our bed skirt. Our little friend needed to be outside so I escorted him to the balcony and took a couple pictures. 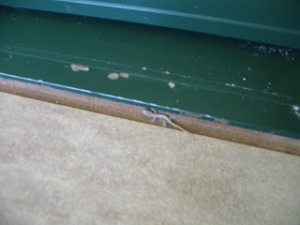 These aren’t the best pictures, but our little friend was a gecko that had found his way into our room somehow. He was a tiny little baby and Lili loved him.

The other thing to note about Day Three is that it was Election Day. We couldn’t wait to turn on CNN to watch the election results come in. There is a 5 hour time difference between Hawaii and the East Coast and we were having a lot of trouble pulling ourselves away from the t.v. although we had to since we had reservations at one of the restaurants on the island. I was in the bathroom drying my hair when Dave came in and announced, “Barack just won the election.” I was elated and will forever remember that I was in Hawaii, blow drying my hair when Barack won. It was another great day in paradise.