First of all, thank you so much for the comments that were left on my last blog post. The situation with Ryan has been a significant source of stress and your comments really touched me.

Things are moving in a positive direction for Ryan right now. The new agency has submitted a funding packet, which means they have put in a request to the state asking that Ryan’s funding be moved from his current agency to the new agency. Once the state approves the change, Ryan will officially become a client of the new agency. This could happen as early as Monday.
As a result, we are beginning his transition today. I will be picking him up early this afternoon and taking him to visit the day training (DT) program for an hour followed by another visit to the house he’ll be moving to. Each day, for the rest of the week I’ll be picking him up and taking him for longer and longer visits to both the DT program and to the house with the goal being an over-night visit this weekend. This transition plan is far from what we would like, but he has to be out of his apartment by the end of the week and will need to transition somewhere so it makes the most sense to have him transition to the new agency.
With the commute to the new agency being over 100 miles one way, I’m going to be gone much more than I’ll be home. As a result, I don’t think I’m going to have much time for blog posts. I have no doubt that I will have plenty of news to share once things calm down and we have Ryan somewhat settled, so stay tuned.
Until then, please let me share a couple photos of Ryan.
Ryan and Lili at Christmas last year. 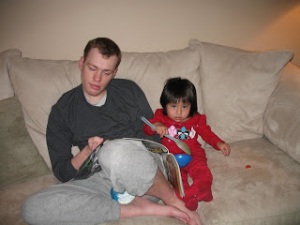 Ryan and Josh at Christmas last year. Can you tell they are brothers? 🙂