For several years, we had an above ground pool.  The pool was used often while the boys were growing up, but when we brought Lili home, the pool use decreased dramatically.  During Naomi’s adoption, we decided to take the pool down.  We knew it wasn’t going to get used enough to make it worth the upkeep, so down it came.

Around the pool was a 4 foot deck.  We couldn’t leave a deck up with a hole in the middle where the pool used to be, so we began dismantling the deck with the plans to rebuild a new deck.

We were making good progress on our deck demolition when our son died and everything came to a stand still.  The sand that sat under the pool became a big sand pit for the girls to play in and the new deck remained a plan with no progress being made.  About the only thing that happened on the deck project was removing deck railing and replacing some of it to keep dogs and kids from jumping off the side of the deck.  Then the deck became a place to sit things like concrete pieces from the deck posts that had been pulled out of the ground and coolers that were outside to dry.  Sadly, the deck we spent so much time enjoying was nothing more than a walkway from the back door to the yard.

A couple weekends ago we decided to get to work on the sand pit area.  We repurposed some landscape blocks and put in a fire pit.  As I looked at the fire pit surrounded by all the sand, I thought it might be nice to see a patio around the pit.  Hubby wasn’t too fond of the idea.  Not that he didn’t like the idea of a patio around the fire pit, but it didn’t want a bit slab of concrete.  Instead, he wanted a paver patio.

Now we had a patio and deck project to complete.  We also needed to replace a sliding patio door on the back of the house and it was way past time to get busy and get things done.  So off we went to order supplies and those supplies were delivered yesterday.

The deck project is primarily replacing deck boards, stairs and railing and will be smaller than our previous deck.  The space we lose on the deck will be replaced by space on the new patio though.

Other than the door, none of these projects will be completed over a weekend and we know what we’ll be doing for the next several weekends as well as some evenings during the week.  So let’s begin. 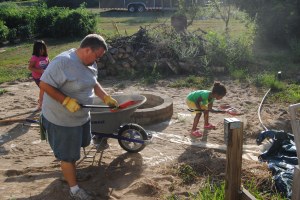 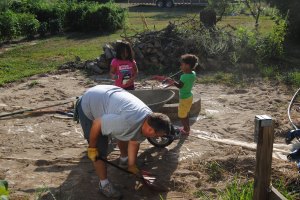 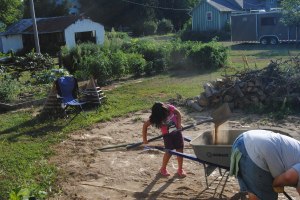 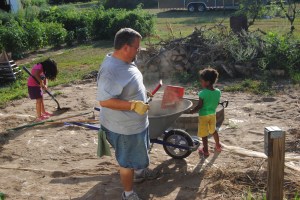 Notice how I’m behind the camera and not out there working 🙂  For good reason though.  I had to take the pictures and was working on canning tomatoes.

We are very excited about getting these projects completed so we can enjoy our new outdoor living space.  I will be posting updates here as progress is made and hopefully we can have everything done before it’s too cold to enjoy.  Although with a fire pit, some cooler weather would certainly be nice.