We woke up to another beautiful day, but due to where our room was on the ship and the direction we were traveling, I wasn’t able to get a sunrise photo 😦  I’m sure it was beautiful though.  Yet I still had to take a picture of the morning. 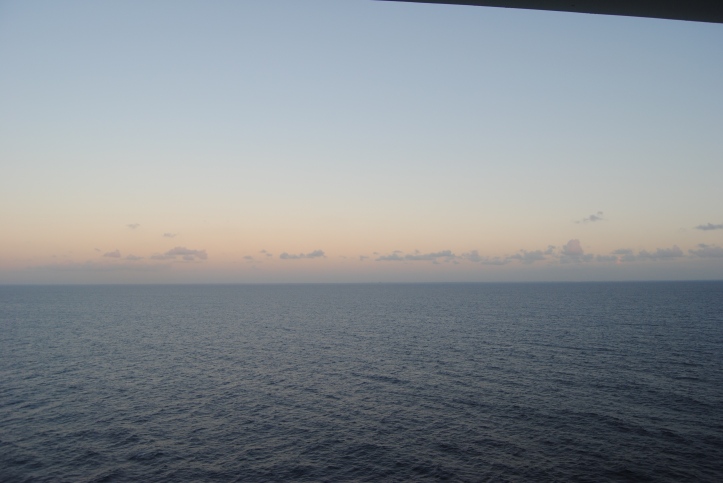 I still set out on the balcony taking in the sights, sounds and smells of the ocean.  I was fortunate to catch a glimpse of a couple of dolphins as we approached port, but not having my camera ready, I wasn’t able to get any photos of them.

During breakfast, we were joined by Allure of the Seas.  We sailed on Allure last year and it was good to see her again.

Here they are next to each other.

After breakfast, we got off the ship and headed to our excursion location.  We were going on a snorkeling and beach excursion, so Lili was pretty excited about the day.  She learned to snorkel on our cruise last year and was anxious to try out her skills once again.

A note to anyone going to Cozumel, don’t try to take fresh food into port.  We had grabbed a few bananas to have as snacks and had to throw them away before they would let us into Cozumel.  I have no idea what they do with all the food they collect, but they had collected quite a bit and it was sad to think it was going to be tossed.

It was only a short walk to the end of a pier near the cruise port and within a few minutes of arriving, a catamaran pulled up and we were soon on board.  Our excursion was with a company called Fury Catamarans and they wasted no time getting everyone on board, handing out snorkel equipment to those who were snorkeling.  Before long we were on our way while our tour guide gave us instructions, keeping us entertained as he spoke.  After he was done, we were free to move about the boat while we made our way to the reef, which was also a great time to get some photos. 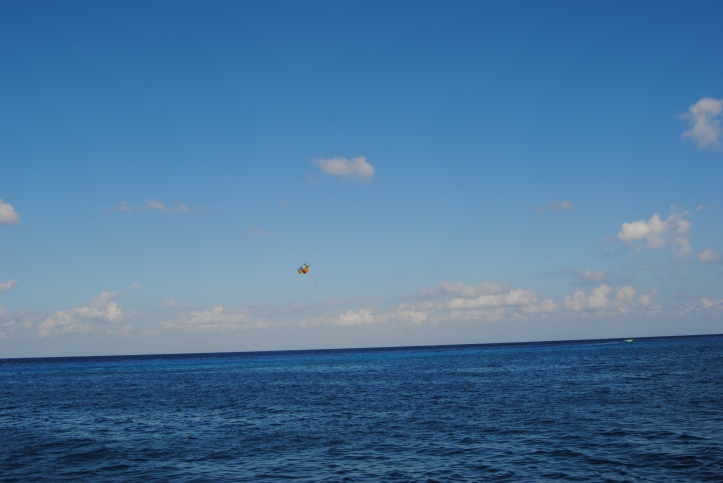 Parasailing looks like fun, but I’m not sure I’m brave enough to actually do it.

Not sure I can ever get enough of the blue ocean water.  It is so beautiful!! 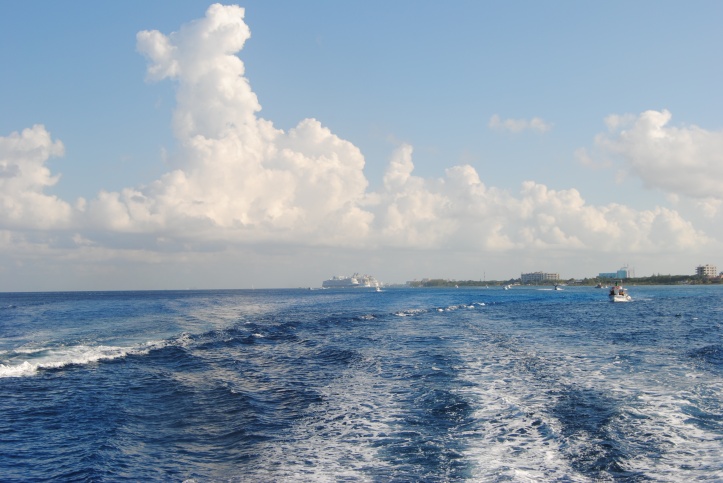 We’re getting further away from port.

These two love being on the boat. 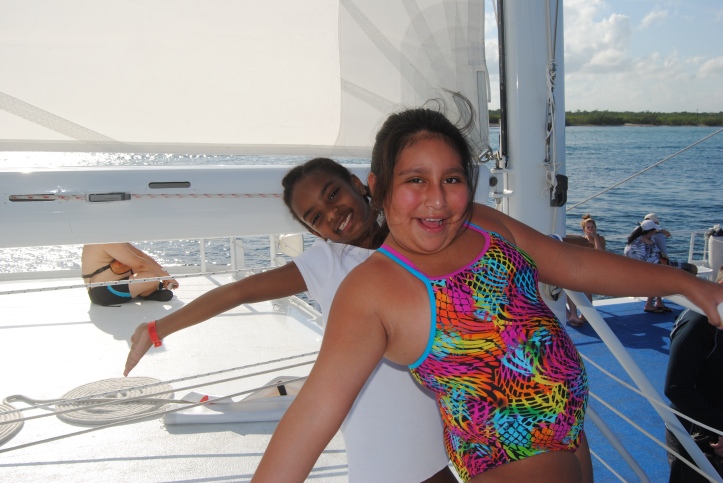 They are having too much fun!

Hubby was enjoying himself as well.

And then we arrive at the reef.  It was time to put on our snorkel gear and get in the water.

Naomi was too scared to try snorkeling this year, so she and hubby stayed on board and took pictures. 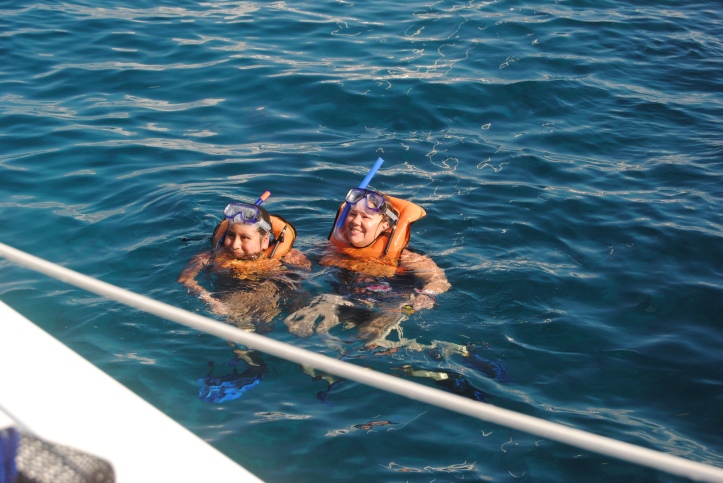 The water was a little cooler than I expected, but it didn’t take long to get used to it. 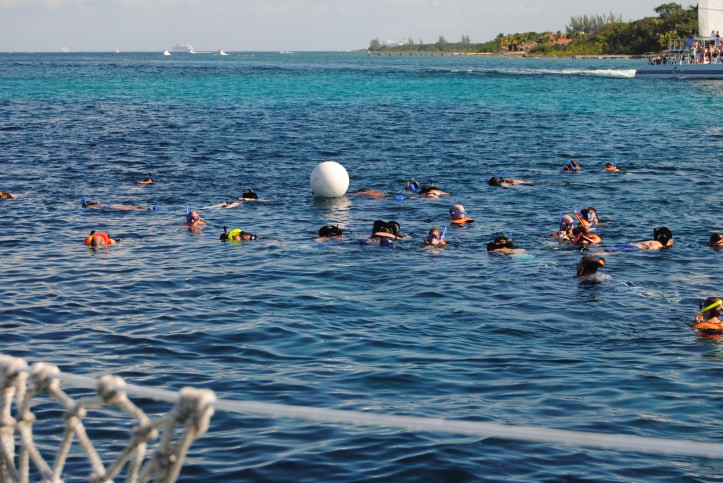 Lili and I snorkeled for about 30 minutes and then headed back to the boat.  A few minutes later, everyone was on board and we headed to the next part of our excursion. 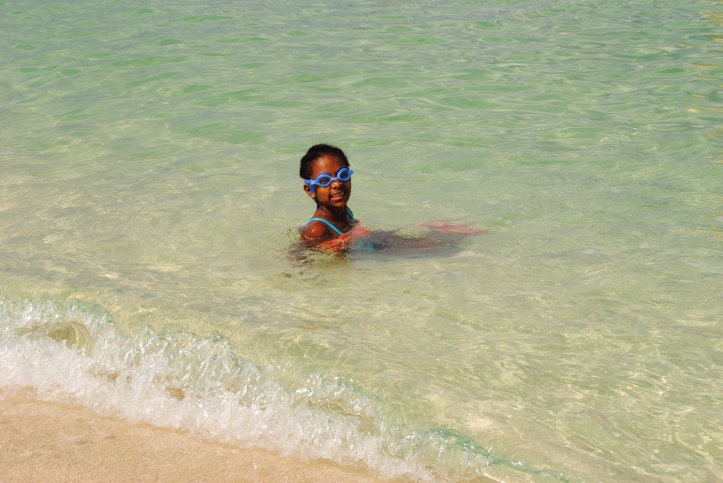 This is Naomi’s idea of water time.  She knows how to swim, but isn’t sure of her abilities yet.  Hopefully another summer in our pool is all she will need.

This beach had some fun water play equipment as well. 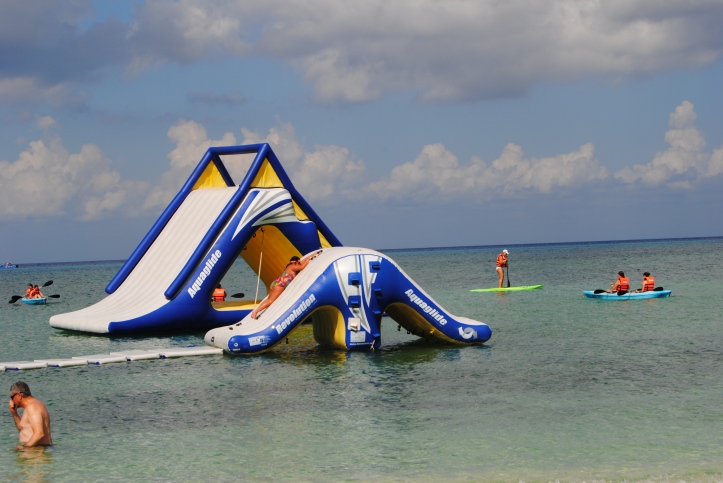 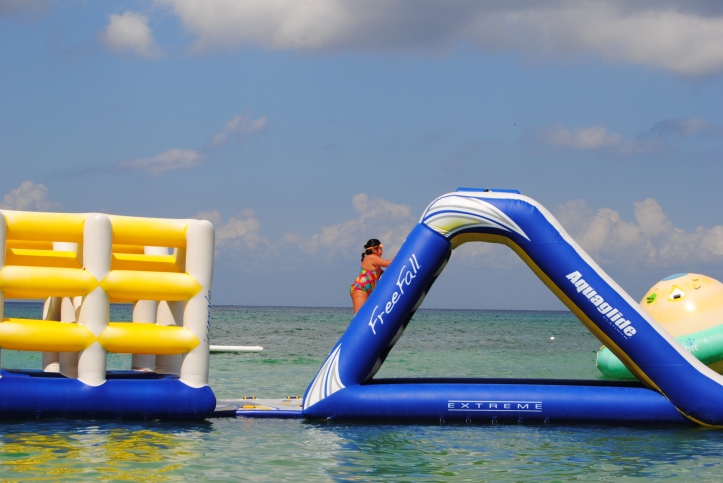 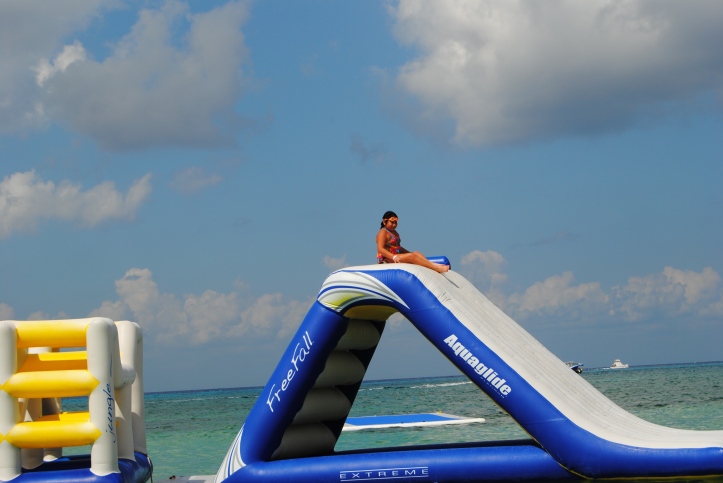 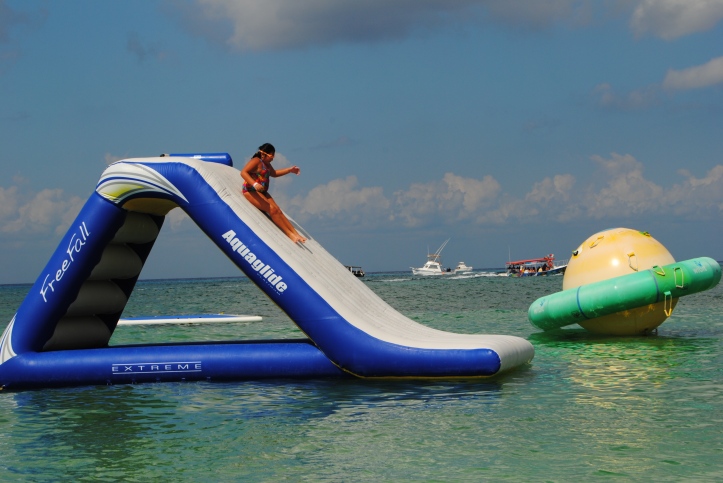 Lili had a great time trying out the different play equipment.

Naomi, on the other hand, had a great time collecting shells and coral pieces again.

And covering her body in sand. 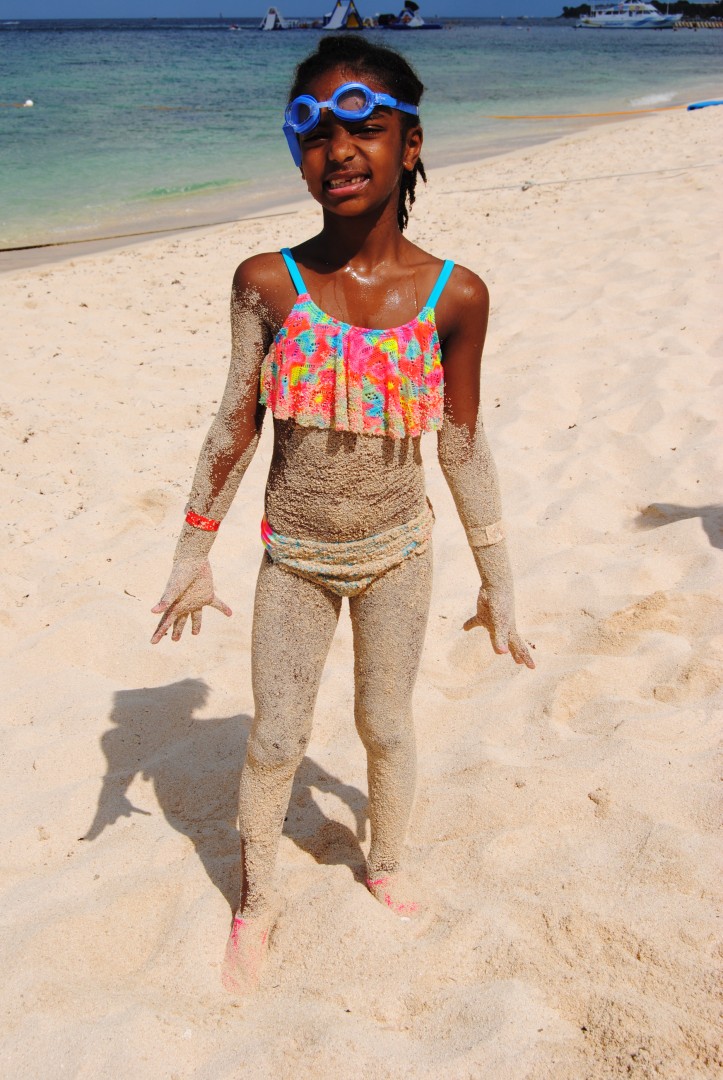 We spent about 1 1/2 hours at this beach and it was wonderful.  We enjoyed the sand, the water, the sun and the drinks that were included as part of our excursion.

Too soon we were back on the boat for our trip back to the ship.  Little did we know that it would become the party barge on the way back.

They served drinks and the crew lead everyone in dancing the Macarena, YMCA, a Conga line and a couple other dances.

Hubby and Lili sat back and watched the dancing.  Naomi and I, on the other hand, joined right in and had an awesome time.

Once we were back on shore, we headed into Cozumel to do a little shopping.

But first we needed to get a picture of the girls with this guy. 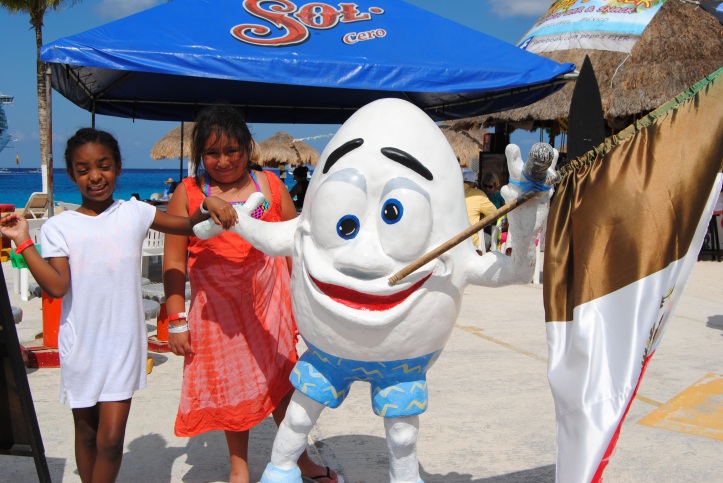 Out of all the stops on this cruise, I was looking forward to Cozumel the least.  We had been there on our first cruise and while we had a good time, it wasn’t anything spectacular in my book.  This time, Cozumel was my favorite port stop out of the three.  The excursion was fantastic and the next time we return to Cozumel, we will be going on another Fury Catamaran snorkel and beach excursion.

Day 5 was packed full of fun and activity, including a Dream Works parade.  I’ll share those photos in a later blog post as well.