I was outside doing some gardening, because that’s the way I like to spend my birthday!!!  When I came inside with my arms full of peppers – we are getting an AWESOME crop of peppers this year – hubby shared a conversation he had overheard between Naomi and our son Josh.

I needed to get this story in writing.  It’s just another example of how creative and funny she is. 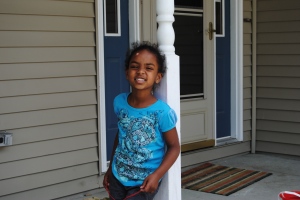