Tuesday of our trip was certainly monumental as we were taking Naomi from Le Toukoul orphanage for good. We had made arrangements with the woman in the orphanage office the day before and by Tuesday afternoon Naomi was in our arms forever. March 16th will forever be Naomianniversary Day in the Weeks house. 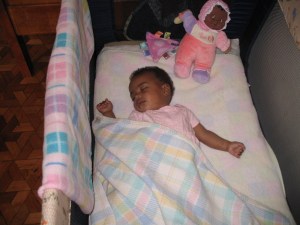 Because we wanted to spend our first days together just getting to know each other. We stayed around the guest home Tuesday and Wednesday. Not much to report, but I do have pictures to share.

Naomi really does smile a lot, but getting her to smile for the camera is challenging. My camera has a little red light that comes on prior to taking the picture which causes her to become a bit serious. However, I was able to get a cute little smile from her. 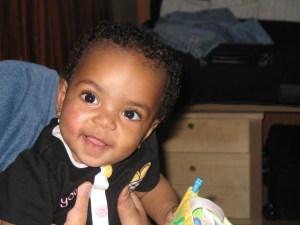 Speaking of Lili, I know some are interested in know how she did on the trip.

She did very well on the flights to Ethiopia. She was excited and had trouble settling down to sleep when we left Washington D.C., but when she finally did go to sleep she slept well. We had to wake her up for our landing in Rome and she was so tired by that point that she wanted to get off the plane. It was next to impossible explaining to her that we still have several hours left to go, but once we got back in the air, she settled down and slept a little more. Honestly, she did better than we anticipated.

All the sleep she did on the plane certainly made the flight more pleasant for us, but that also meant that she wasn’t tired when we got to the guest home. Mommy and daddy didn’t sleep quite as well on the plane, so we had some additional challenges the first night getting everyone to sleep.

We were all excited about seeing Naomi on Monday, but for Lili, exploring new surroundings was major fun. She was interested in checking out the guest home and playing outside. Our guest home had a small yard and a patio area. Lili took full advantage of the space every chance she got.

I can honestly say that having her with us was challenging several different times during the trip. She had complete melt downs more than once (that was expected) and didn’t eat well, but it was an awesome experience for all of us and being there together as a family was so very special. Watching Lili and Naomi together in Naomi’s country of birth was amazing and we have already witnessed the bond that is growing between them.

The other realization we came to was knowing that had we not taken Lili, our return home would have been much more difficult. She desires a lot of our attention and that would have most certainly been multiplied by at least 10 after not seeing us for so long. It would have been extremely difficult to provide her with the attention she needed and to give Naomi the attention she also needs. Having her there from the beginning of Naomi’s physical arrival into our family most certainly helped. There was and still is jealousy that rears its ugly head from time to time, but we knew that would happen. Every day we settle in a little bit more and things get a little better.