Yes folks, the title of my blog post is correct. My oldest turned 28 today, but he’s still my baby. Those of you who have been reading my blog for awhile know that Ryan has Autism. As a result, we try to avoid parties that could potentially over-stimulate him, but instead try to keep everything low key. Tonight Dave, Josh, Ben, Lili and I took Ryan to Carlos O’Kelly’s for dinner. He had his favorite, queso dip and chips and was all smiles. After dinner we went back to his new apartment so he could open his gift. It was the first time Josh and Ben had seen his apartment and they were impressed. Overall, it was a nice evening out and one that Ryan appeared to enjoy quite a bit.
Here are a few photos of the birthday guy.
Ryan (77 on his shirt) and Josh at Carlos O’Kelly’s. 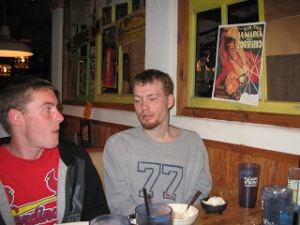 Ryan at his apartment after opening his gift.

Getting a good picture of Ryan is quite the challenge. For a matter-of-fact, just getting him to look toward the camera is a success. I’ll try again at Thanksgiving and hopefully we’ll have more success.