On the spur of the moment, we decided to jump in the van and drive to Texas to attend my sister-in-law’s 50th birthday bash. When we received the invite we told her we would not be attending. At the time we were in the midst of trying to find a new agency for Ryan and then transitioning him to that new agency. Making a trip to Texas just didn’t seem possible with everything else going on. However, now that Ryan was moved and appeared to be settling in nicely, we started to discuss the possibility of making the trip after all. So, after some phone calls to make sure the new agency would be fine with us leaving for a few days and setting up boarding for Jada and Lexie, we packed our bags and set out on our 14 hour drive.

We purposely did not tell my dear sister-in-law that we were coming. At this point we thought it would be much more fun to surprise her. So, we contacted our niece and filled her in on the plan and asked for her assistance. With a plan in place and we headed to a local North Dallas Mexican restaurant and waited for her arrival in hopes that she still had no clue we would be there. What we didn’t expect was that we would also be surprising our nephew who had flown in from New York that morning. We walked in and the look on his face told us that he really wasn’t expecting to see Uncle Dave, Aunt Debbie and Lili walk through the door. That was a bonus.
After waiting about 20 minutes, the guest-of-honor finally arrived. As she approached the area where we were sitting, she looked over at the end of the table and saw us sitting there, screamed and began to run toward Lili and I as she was passing her New York son. She then decided she should stop and give him a quick hug before completing her run to hug Lili and I followed by a hug for her brother. The surprise was a success!!!!! 🙂
After a nice lunch, we headed out to check in to the hotel where the party was being held. Lili was the only child at the party, but she didn’t care. Once she was introduced to the dance floor in the ballroom and that was all she cared about. When the music was on, Lili was on the dance floor. I see “So You Think You Can Dance” in her future. Okay, maybe some dance lessons are in order before a dance competition.

I cut off the top of her head in the this photo, but she had such a cute smile I just had to share.

And this one is blurry, but again such a cute expression I have to share. 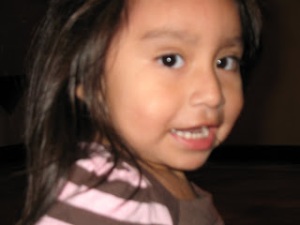 It was a quick trip, but we’re so happy we made drive.