I have had many memorable Christmas celebrations over the years, but this is certainly one that I will fondly remember.

For those who read my Christmas Eve post, you know that 6 weeks and 1 day post referral, we finally received word of our court date in Ethiopia. Our case will go before a judge on January 8th – 8 weeks and 2 days post referral. If all our paperwork is in order, the judge will declare Naomi to legally be our daughter. Of course in our hearts she has been ours since the first day we laid eyes on her, but the legal process must take place before we can bring her home and we are very anxious for that to happen.

On Christmas morning we were still excited about the news from the day before, but Lili made this day extra special. At 2 1/2 years of age she was able to understand more about Christmas and very caught up in the awe and wonder of it all. That is what made the day so memorable for me.

Being 2 1/2 also meant that she was under the impression that ALL the gifts under the tree were hers, but she quickly got into the spirit of giving each person their gifts to open. She would even sit patiently watching as each person opened their gift. Okay, she sat patiently as each person opened a couple gifts and then she was done. Really, what more could anyone expect from a 2 1/2 year old 🙂 Still, it was so much fun watching her excitement about not only receiving, but also giving.

There was a lot of laughter in the house as we opened gifts and a couple moments in particular stand out to me this year.

Ben had opened his first gift which included some new boxers and sock. It was at that moment I realized we had not shared our new family tradition with him so I began to explain ‘F-A-M-I-L-Y‘ and that each letter described the type of gift that would be in the package. I told him, “F stands for . . . .” and at this point he interrupted me and said, “Fruit of the Loom.” This was a ROTFL moment for me and we were fortunate to have caught the entire exchange on video. And yes, Ben is a really funny guy. I did explain to him that F stood for future, which would be a gift that would be used in the future, but I will forever remember F also stands for Fruit of the Loom.

We scaled down Christmas quite a bit this year. It was primarily out of necessity since we are desperately trying to collect the money necessary to travel to Ethiopia in about 8 weeks. However, in scaling back we came to the realization that scaling back will also become a family tradition. It’s so easy to get caught up in the commercial hype during this time of the year and by creating our new ‘F-A-M-I-L-Y’ tradition and scaling back, we had new focus and put more thought into our gifts this year.

One of the gifts that I thought long and hard about for Lili was her own camera. For the last couple of months she has been picking just about anything that is a square or rectangular shape and using it as a camera. She was also very interested in using my camera to take pictures, which was okay when I was helping, but it was getting to the point that she wanted to be behind the camera instead of in front of the camera. After a lot of thought and research, I found a good deal on a VTech digital camera for her. If I would have known just how excited and thrilled she was going to be about this camera, I wouldn’t have thought about it as long as I did. I’m sure she had taken well over 100 pictures and little did we know we would be so entertained watching her take these pictures. She tells everyone to say cheese, presses the camera up to her face as if looking through the view finder, but really not looking at anything and then snaps the picture. Since the camera tends to be tilted up or down when pressing the shutter button, I have no doubt the majority of pictures are of the ceiling and floor, but watching the joy as she snaps away is priceless.

Lili’s Future gift was her own carry-on bag for our trip to Ethioipia. It’s pink and the front is nothing but a huge picture of Dora and Boots. It is just her size with a sliding handle and wheels. She has been getting a lot of practice rolling it through the house and I really had no idea she was going to love it as much as she does.

There were other special moments throughout the day, but instead of continuing on I’ll just share a few photos from ‘My Christmas to Remember.”

Santa left a few crumbs on the cookie plate. I also think that next year we need to put the cookies on a cut little Christmas plate 🙂 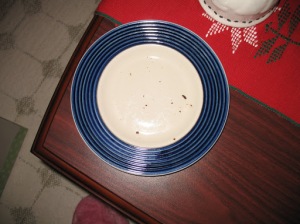 The photographer in action! 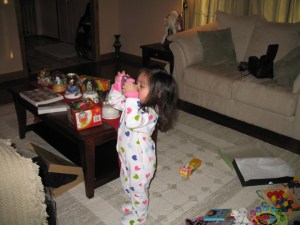 Lili had to stop and try out each new toy before unwrapping the next gift. Here she is putting together her new clock puzzle. It wasn’t overly challenging for her, but will help her with number recognition and learning to tell time.

In the not too distant future I’ll post some of Lili’s photography on my blog. I’m sure you will all be checking in frequently for that post 🙂

And how exciting to know that next year I’ll be including photos of our little Naomi at Christmas!!!! I’m sure Christmas 2010 will be another Christmas to Remember!!!!

7 thoughts on “A Christmas to Remember”