On Friday we bid farewell to Illinois.  I had been so focused on getting everything ready for our move that I hadn’t spent a lot of time thinking about the move itself.  So as I put the last of our belongings in hubby’s car (minus my cast iron skillets – story to be shared later), I suddenly became teary as the enormity of the move flooded over me.  After all, we had spent 19 years, 9 months in our Illinois home.  We had not only built our house, but we had built our life there and that life was full of memories.  Those memories we carry with us and it was those memories that flooded over me in that moment.

I wish I would have taken pictures of the empty shell we left behind, but those pictures will be available on our realtor’s site soon enough 🙂

On Friday night we stopped in Missouri for the night.  Driving Georgette takes a little more time.  For safety reasons, I don’t push her too hard and with hubby following behind in a packed U-Haul truck, we weren’t on a mission to make good time.  Our mission was a safe arrival period and we arrived very safely to the Springfield KOA.

On Saturday we headed out and a short time later stopped at a truck stop to find some fuses we needed for Georgette.  She had blown a fuse that caused the break lights to go out and that didn’t make me feel warm and fuzzy at all.  Hubby got the fuses, found the culprit and replaced it.  Voila’ – break lights.  That was until we hit the interstate and he called to let me know my break lights were out again.  Obviously, this was a problem and we were going to need to have Georgette looked at.  When and where was the question.

Hubby followed behind and we cautiously continued on our way making it to the KOA in Durant, OK.  It was dark by the time we arrived, but from the little bit we could see, it appeared to be a very nice campground.  They offered shuttle service to the Choctaw Casino next door, but I suppressed my urge to go drop some change in the slot machines and we hunkered down for the night.  Good thing too since the rains came in during the night and they came in hard.  Torrential downpours which tested Georgette, but she held strong and had no leaks.

Early the next morning we headed out and before long we were in Texas and not too long after we pulled into the RV park – Shady Creek.  The goal was to arrive early enough that we had plenty of time to set up and unload the U-Haul before dark.  All went well and we were in Georgette before it got dark and I was faced with my biggest challenge of the move – finding a place to put everything.  I either needed to find a way to add more space or we were going to need something bigger.

Amongst all the clutter, one thing was abundantly clear, Georgette needed some Christmas spirit, so we got our Christmas on.  We dodged containers and all the mess and this was the end result. 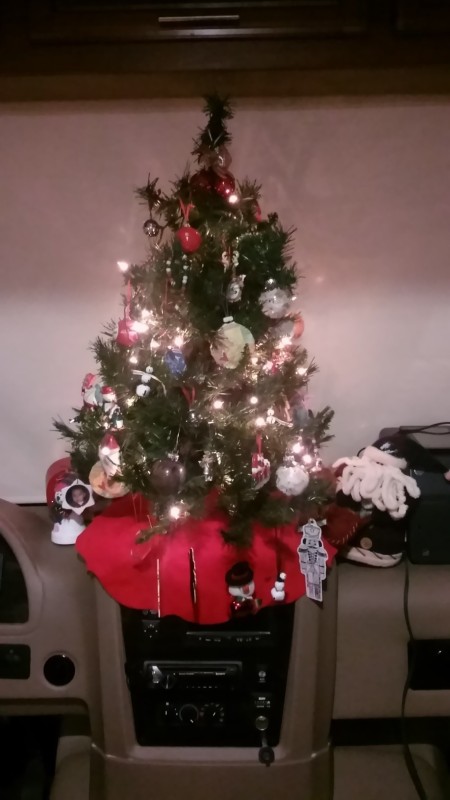 Yesterday we added a star.

And we hung stockings.

I still have a lot of mess to clean up and put away, but at least we’re ready for our first Texas Christmas and that is the most important thing.