Skip to content
It’s Favorite Photo Sunday at the Weeks’ house 🙂
Yesterday we attended a Halloween party hosted by our home study agency. I was concerned that Lili would be frightened by the costumes, but even the scariest of costumes only intrigued her. My other concern was that she would protest wearing her costume, but again she wore it without complaining at all.
You would think that having your child in costume means many photo ops, but let me just say that Lili isn’t the easiest subject to photograph. She is constantly on the go and when you do get her to stand still she isn’t a willing participant and has now started smiling after the photo is taken. I’m sure this has to do with the sound my camera makes when the picture is taken. I discovered recently that you can change the shutter sound and mine sounds like a dog bark now, which she thinks is funny, but doesn’t necessary assist while I’m trying to get a smile out of her for the picture.
So, I now present Lili the ladybug, who smiled after the picture was taken.
Please ignore the woman holding Lili, who looks like she was drinking something stronger than the lemonade that was served at the party. 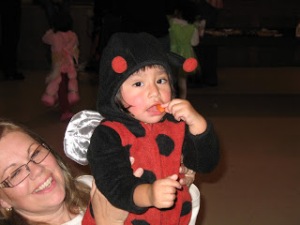 And here is Lili the Ladybug who was too busy watching the kids to pose at all for a photo. 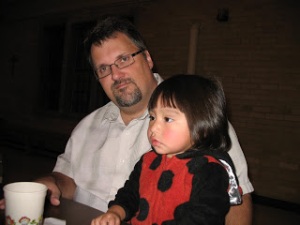 At least we have some newer picture of Lili with mommy and daddy.
Ben was looking at picture of Lili that I had on the camera and commented that she wasn’t smiling in the photos. I explained that she now smiles after the picture is taken and he wanted to find out for himself so he took some pictures of her this morning. Here is what he got.

Lili waiting for the picture to be taken. 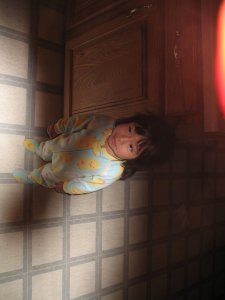 She smiled and then waited again. 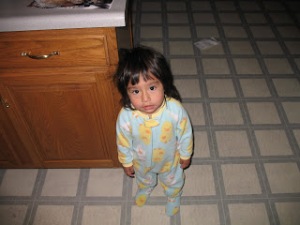